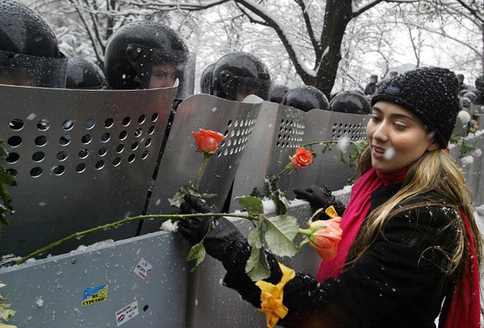 What were the goals of the revolution?

The main goal of the Rose Revolution was to overthrow a dictator, Shevardnadze, who was a member of a communist party. The opposition force made many promises and set goals according this revolution to the people of Georgia- they (Saakashvili and his supporters) promised a change in the government; they planned to restore Georgia’s previous appearance, by bringing Abkhazia and South Ossetia back; they fought corruption, claimed to reinvigorate the economy, and fix Georgia’s crumbling democracy (which, by that point, hardly existed).

The promises and goals were stated over and over again, but not many actions were taken to achieve what they wanted (for example, even though the complete lack of violence in the Rose Revolution is a positive aspect, it still shows that not much was being done about it from the opposition’s side).

Other countries also had some goals according the Rose revolution.

The revolution was viewed differently by different countries. Russia, which later played a great part in Shevarnadze’s resignation (Russian politicians had a conversation with him moments before he resigned), looked at the situation negatively- for them, it was a replacement of a weak leader by a new, strong willed one. The leader could completely change the regime, and it could further Georgia away, making it more independent. Russia and Georgia were also very close trading partners, and the conflict wasn’t benefiting either side. The Russian army decided to stay out of the main conflict and furthered itself as far as possible from it in order to not spoil the good terms that the two countries were in. Later, when they were asked for military help, they still refused. In America, the revolution was viewed in almost a completely opposite way. West stated that the Georgian revolution was the most democratic, and should be taken as an example (even though about 80 thousand votes weren’t considered during the voting process)

A great hope was placed on the new leader’s, Saakashvili’s, shoulders, and everyone trusted him to “fix” Georgia. He was to bring back democracy (that was hardly existent), strengthen the economy and make reformations. Both Europe and America supported the opposition.

Georgians started demonstrating in the streets and threatening the Government with an upcoming revolution to get rid of corruption, poverty, loss of territory (Abkhazia and South Ossetia), failures in the delivery of basic services, which they blamed on the existing regime.

There were many hopes and goals according this revolution, and people were determined to get what they thought they deserved- no dictatorship, democracy and a strong, reliable economy.
What happened after the revolution/what was the aftermath?

Many people were overwhelmed by post–revolutionary euphoria, and they wondered how Georgia’s state would change
after the Revolution. How it would be different from Shevardnadze’s stern regime. After the Rose Revolution Mikheil Saakasahvili, as the new president of Georgia, was mainly focused on bringing his election pledges to life. Taking action was necessary to not lose support from demanding citizens. One of the first things Saakashvili did for the country was that he intended to change previous president’s regime outright. He was basically trying to turn Georgia from complete autocracy to democracy. As you can see, his main goal was to give the citizens more opportunities to act and express themselves by expanding their horizons. First of all, he adopted the “Law of Broadcasting on TV”
and “The Law of Freedom of Speech”. But for some reason, government’s decisions did not really interfere with media at that point. Independent journalists, writing rash texts, were attacked by individuals who didn’t know, that Saakashvili had adopted the law of self–expression, and that the media had actually been permitted to publish such defiant articles. As Mikhail became aware of that, he was obliged to also write the law of “The adoption of professional standards for the media”, signed by numerous major print and electronic media and “Further improvement of a comprehensive freedom of expression law”. The government continued to lift Georgia from stagnation, economical crisis, and corruption.
Georgia, a post-communist country, has been known for its political corruption since 1972, when the Shevardnadze regime (authoritarian communist regime under the power of president Eduard Shevardnadze) started. Georgia was a generally repressed communist part of the soviet union. under the power of old Soviet Union, marked by absence of freedom of speech and economic suppression. Just like in many other post communist countries such as Poland and the Czech Republic, Georgia has undergone a peaceful regime transformation into democracy, in the so called “ Rose Revolution” in November 2nd, 2003. However,This is not the question at hand. before the rose revolution, police had the power to collect fines from citizens without significant proveable cause. Government officials borrowed money from the state banks, many of them were never paid off. Prior to the Rose revolution, there was already propaganda against Eduard Shevardnadze. There was a TV station known as Rustavi 2. Rustavi 2 was being paid a lot of money to talk trash about Eduard Shevardnadze. Who founded Rustavi 2? A man named George Soros. Soros paid the Rustavi 2 group to show propaganda
on TV. Mr. Soros also paid another media to badmouth the regime. A newspaper known as 24 chasa (24 hours). Although the newspaper did spread some information about Eduard Shevardnadze, it wasn’t so popular. But Rustavi 2 on the other hand was one of the largest, most vastly watched TV channels in all of Georgia. When Shevardnadze tried to shut down Rustavi 2
, people were outraged. It looked as if Shevardnadze was trying to stop people from knowing the corruption he was hiding. This was not a smart move because it proved there was corruption going on. Another thing was that this made people think that Shevardnadze would lose the election due to corruption. When the independent observers noticed electoral fraud, it was the last straw. It was obvious to most of the country that their president is corrupt scum. People started to stand up for their dying country, for freedom of speech and for transparency in the government , thus starting the Rose Revolution. 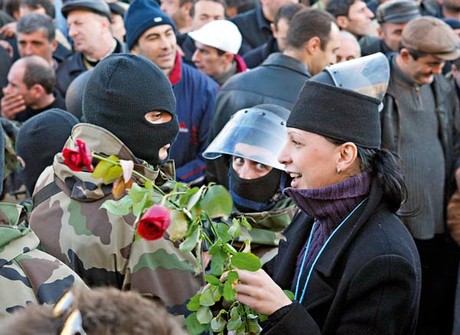 Why was Shevardnadze scared of a civil war and how did he deal with the protests?

During the Rose Revolution that took place in Georgia, 2003, President Eduard Shevardnadze was opposed during the parliamentary elections and accused of fraud in the results. He dealt with the protests by deploying troops in the city of Tbilisi to suppress the protesters’ anger. Shevardnadze feared that a civil war might break out like in 1991-1993.

The 2003 parliamentary elections ended up in a revolution. Flawed results in favor of Eduard Shevardnadze, a Soviet-era Communist boss who ruled Georgia for more than thirty years, caused hundreds of infuriated Georgian citizens to take to the streets in protest. Fearing a civil war Shevardnadze deployed troops in the city of Tbilisi.

Shevardnadze feared a civil war because of the thousands of people who took to the streets to protest the fraudulent results. The fear might have also been caused by the civil war of 1991 - 1993 between supporters of Zviad Gamsakhurdia and Eduard Shevardnadze in western Georgia.  Gamsakhurdia lost support due to dictatorial behavior, he was deemed “totalitarian and demagogue” by his opposition. A civil war broke out when clashes between Gamsakhurdia’s supporters and opponents.

"The present situation of civil confrontation may develop into a civil war," he said. "I appeal to the population of Georgia not to attend the opposition rally outside the parliament building today." - Shevardnadze’s pleas through television to stop rallies.

To Eduard’s relief, another civil war didn’t break out because the opposition leader, Mikheil Saakashvili urged the protesters to remain peaceful which in the end resulted in a peaceful revolution.

To deal with the protests and suppress potential violence, Shevardnadze deployed troops in the capital, Tbilisi. By then the student protesters came out with roses and gave them to the soldiers, causing many to lay down their weapons and even switch sides to support the opposition. He lost support from even the military because of his acts of corruption that involved him and his family.

In conclusion, Eduard Shevardnadze was afraid of a civil war because of the actions in 1991 - 1993 and the fury of the protestors. To deal with the protests, he deployed troops in Tbilisi to subdue any violent actions. Due to Mikheil Saakashvili’s calls to keep protests peaceful a civil war was avoided. 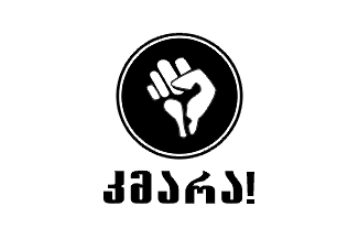 What actions did the protesters do to lead to Shevardnadze’s resignation and the revolution’s success?

During the Rose Revolution of 2003, Georgians came out on the streets to protest the fraudulent election results in Eduard Shevardnadze’s favor. Mikheil Saakashvili, leader of the United National Movement in Tbilisi, called up Georgian citizens to start rallies in other cities such as Zugdidi, Telavi, and Gori. A group called Kmara (“Enough”) was formed and played a big role in getting young students to protest and support the cause.

Due to fraudulent election results, student protesters came out in masses to protest against the Shevardnadze regime. Lead by Kmara and Saakashvili, rallies were peaceful and potent. The protesters fury struck fear of a civil war into Shevardnadze. He deployed troops in the city of Tbilisi to suppress the protests. The military forces, however, decided not to use force. Many even laid down their weapons and joined the opposition. That was because protesters, instead of starting fights, were giving roses and kissing the soldiers in sign of peace.

The Most powerful demonstration happened on 24th of November. Saakashvili along with about 20,000 to 30,000 people stormed the parliament. The demonstrators helped Saakashvili shift powers in Georgia when he came up to Eduard Shevardnadze during a meeting, waved a rose in his face and shouted “Resign!”

Kmara was a youth group that made massive contributions to the revolution such as spreading word out about the revolution and mobilizing many young protestors to help empower the protests. Kmara lead many protests and rallies during the revolution. The first one happened on April 14, 2003 when about 200 students from Tbilisi State University demonstrated against President Shevardnadze and the corrupt government whilst chanting “kmara”.

In conclusion, student marches and the group Kmara were two very influential parts of the revolution’s success.
Powered by